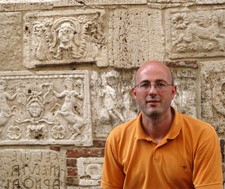 Francesco de Angelis works on Roman, Etruscan, and Greek art and architecture, with a particular focus on the interaction between viewers, spaces, and social practices; cultural memory; bodies and embodiment in ancient art; and the visual tradition of mythology as expression of intercultural relationships, both synchronically and diachronically.

His research on the diffusion, appropriation, and reconfiguration of state imagery in the Roman world analyzes the role of viewing contexts and viewing circumstances in the reception of official monuments both within and beyond the public realm, and puts particular emphasis on the notion of ornament as well as the interplay of attention and distraction. In his work on the arts of the Greeks in Imperial times, de Angelis is especially interested in how the system of cultural mnemotechnics underlying the visual culture of the high Empire both expressed and shaped cultural identities. The function of monuments as lieux de mémoire for travelers and intellectuals like Pausanias and Plutarch, the status of copies in Roman imperial culture, the manifestation of artistic identity through artists’ signatures and in ancient discourses on art, are among the themes he has been addressing in this context. A further project, on ancient antiquarianism, examines the place of monuments in Greek and Roman historical thinking, from Herodotus and Theopompus to Varro and Dionysius of Halicarnassus.

The human (and animal) body as a key figural component of Etruscan furnishings and tools—tables, incense-burners, paterae, strigils, etc.—is the focus of his research analyzing Etruscan notions of the body through the study of corporeal representation and artifactual embodiment, with particular attention to the relationship to Greek physical ideals. In his work on Etruscan funerary imagery, de Angelis has examined the way in which the inhabitants of the cities of northern Etruria interpreted and re-fashioned the Greek mythological repertoire when using it to decorate their cinerary urns and sarcophagi.

As the co-founder and co-director—with historian Marco Maiuro—of the Advanced Program of Ancient History and Art (APAHA), Francesco de Angelis has been leading the excavation at the UNESCO World Heritage site of Hadrian’s Villa in Tivoli since 2014. This fieldwork project places emphasis on the everyday dimension of the villa as well as its long-term history. By approaching an exceptional site with “ordinary” archaeological methods, the project provides a perspective never properly developed in traditional scholarship on Hadrian’s Villa. The excavation has already been yielding new insights into the architectural planning process of the villa’s non-imperial quarters (including impressive parallels to contemporary developments in Ostia), the designing of mosaics and paintings, the religious life at the site, and the dynamics of its post-Hadrianic history, from the Antonines to late Antiquity and down to the Middle Ages and the early Modern period.

Francesco de Angelis has worked at the German Archaeological Institute in Rome and at the Scuola Normale Superiore in Pisa. He has organized conferences, workshops, and exhibitions on several themes, from Philostratus’ ekphraseis to Columbia’s own collection of archaeological artifacts, to—most recently—functions and connotations of the kantharos. He is the recipient of numerous fellowships and awards (Getty Research Institute; Humboldt Foundation; Columbia’s Lenfest Distinguished Faculty Award). In 2015 he was nominated the President of the U.S. section of the National Institute of Etruscan and Italic Studies. Since 2016 he chairs the Classical Studies Graduate Program.

Spaces of Justice in the Roman World