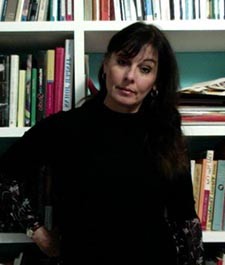 Janet Kraynak
Senior Lecturer in the Discipline of Art History and Archaeology; Director of MA in Modern and Contemporary Art: Critical and Curatorial Studies (MODA)

Prof. Kraynak writes and teaches about the history and theory of postwar and contemporary art, focusing upon the transformation of the artistic object as an analogue for larger socio-political developments. Her research examines the emergence of non-traditional mediums (including time-based, linguistic, and technically mediated forms) at moments of crisis and upheaval: from the revolutionary 1960s and the post-1989 period with the emergence of globalization to the current crises of a digitally mediated public sphere. With a particular interest in the interdisciplinary turn in the production and reception of art, Kraynak's scholarship traces the advent of performance strategies in the visual arts, as well as the advent of digitization as a social and political form.

Kraynak is the author of numerous books, including the edited volume, Please Pay Attention Please: Bruce Nauman's Words: Writings and Interviews (MIT Press, 2003); the Survey, Monica Bonvicini (Phaidon Press, 2014), Nauman Reiterated (University of Minnesota Press 2014), Jon Pestoni: Family Plot (David Kordansky Gallery and the Cleveland Museum of Art, 2016). Her latest book, Contemporary Art and The Digitization of Everyday Life, for which she was awarded The Creative Capital/Andy Warhol Foundation Arts Writers Grant (2017), is being published by the University of California Press (2020). She has written articles on artists including Glenn Ligon, Philippe Parreno, Rosemarie Trockel, Do-Ho Suh and Rirkrit Tiravanija, among others. Across numerous writings, Kraynak has theorized the rise of participatory practices in the 1960s, their resurgence during the 1990s, and their continued transformation with the rise of the Internet, critically undermining claims for democratization by addressing modes of coercion and control and the rise of political inequality. As a scholar and critic, Kraynak's writings have appeared in Art Journal, Grey Room, Artforum, Frieze, and The Journal of Visual Culture among other publications. She has lectured widely on contemporary art at such venues as the Getty Research Institute, the Museum of Modern Art, the Whitney Museum of American Art, the Institute for Aesthetic Studies, University of Aarhus, Denmark, among others.

Prior to joining the faculty at Columbia, Kraynak was at the New School in New York for nine years, where she was Associate Professor of Contemporary Art History. Formerly faculty at the Center for Curatorial Studies, Bard College and Purchase College, SUNY, where she was the acting Director of the MA/MFA Program in Contemporary Art, Criticism and Theory, Kraynak has a longstanding pedagogical interest in curatorial studies and the history and theory of exhibitions, teaching classes that consider the changing role of the museum and the function of the curator in contemporary art. She has curated several exhibitions, is the former New York/International Field Editor for Exhibitions: Modern and Contemporary at caa.reviews, and had a longstanding relationship with the Whitney Museum of American Art, including as Teaching Fellow. Kraynak also served on the Editorial Board of Art Journal, and is the recipient of the 2010 Art Journal Award of Distinction, for her article, "'The Land' and the Economics of Sustainabilty."

Contemporary Art and The Digitization of Everyday Life, University of California Press (2020).

"‘Therapeutic‘ Participation: On the Legacy of Nauman’s Yellow Room and Other Works,“ in Practicable: from Participation to Interaction in Contemporary Art, Samuel Bianchini and Erik Verhagen (eds.), MIT Press (2016).

"Nan Goldin's Witnesses Against Our Vanishing: Representation, Cultural Politics, and the 1980's," in Rhea Anastas and Michael Brenson (eds.) A Witness to Her Art (Bard College), 2006.

Contemporary Art and the Digitization of Everyday Life

Janet Kraynak
Back to Top